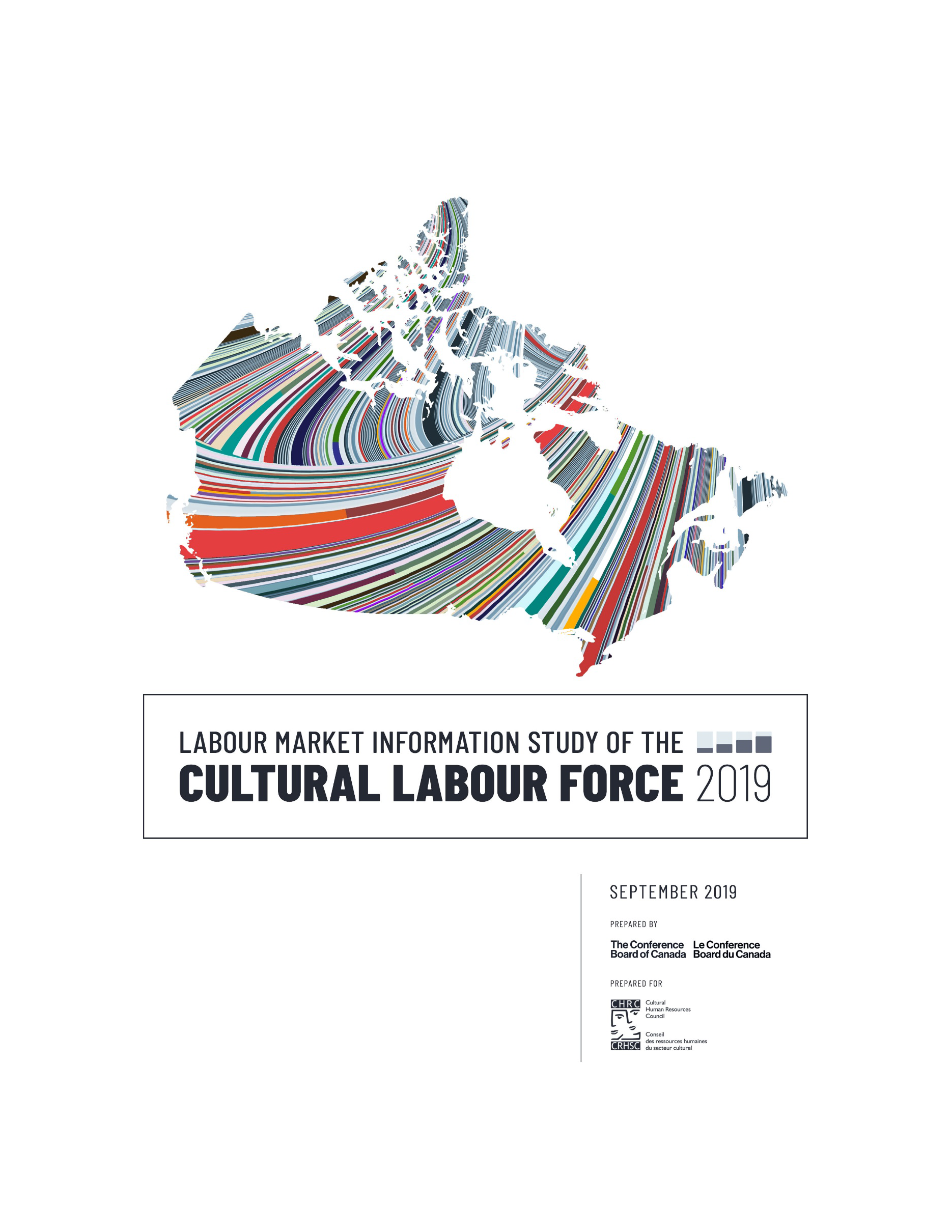 A dynamic cultural sector is central to the success of Canada’s creative, knowledge-based economy. To stay abreast of the impacts on the labour market of rapidly evolving changes in the demand for and delivery of cultural products, the Cultural Human Resources Council commissioned The Conference Board of Canada to conduct this labour market information study, which updates a 2010 study. Accurate and up-to-date labour market information about the cultural sector is the best tool to enable individuals and organizations to respond to these changes.

Through consultations with a variety of cultural sector professionals, a conceptual definition of cultural work and output was developed for this study:

Cultural activity involves the creation, research, development, production, manufacturing, distribution, presentation, performance, and/or preservation of creative goods and services, including the discovery and preservation of heritage—all with a professional intent.

This definition recognizes the distinct activities associated with the “creative chain” and the nature of heritage while also distinguishing between labour market and hobby or pastime activities.

The footprint of the cultural sector on the overall economy is significant and growing. Between 2013 and 2017, real value-added output of Canada’s cultural sector grew at an average annual rate of close to 1 per cent. By 2017, it generated $58.8 billion in direct gross domestic product (GDP)—2.7 per cent of the total GDP of Canada.

According to the census, cultural workers tend to be younger on average then the overall Canadian labour force and have a higher level of educational attainment. In fact, 43 per cent hold a bachelor’s degree or higher, versus 25 per cent in the overall labour force.

Despite the higher levels of education, employment income among cultural occupations tends to be lower than for the Canadian labour force overall. Another difference with the rest of the Canadian labour force is the high prevalence of self-employment, at 28 per cent—more than double the national average of 12 per cent. For creative and artistic production occupations in the cultural sector, the rate of self-employment jumps to nearly 41 per cent.

While various approaches and measures can be used to convey the tangible economic footprint of the cultural sector, there are currently no reliable methods to quantify the subjective experiential value or benefit the sector provides to individuals and society at large. In fact, even when reporting on the sector’s tangible economic footprint, the concept of culture must be measured within available statistical systems.

Therefore, in addition to the census data collected for this report, insights were also generated by conducting focus groups, interviews, and a pan-Canadian online survey comprising individual workers in the sector and businesses. Gathering primary data from the focus groups, interviews, and online survey was an important component in gathering qualitative insights into understanding the working environment of cultural occupations.

Two major themes (broadly categorized) in the focus groups revolved around scarcity of resources and an abundance of available production.

The scarcity of resources theme includes monetary challenges, such as low wages, precarity of work, and difficulty securing funding or generating stable revenue streams. Another aspect of scarcity of resources is the difficulty in finding qualified workers who often need to operate in multiple simultaneous roles for only modest pay. Recruiting for rural locations and for mid-level positions appears to represent an even more daunting challenge for employers. The scarcity of resources theme includes the high reliance on goodwill and volunteering. Aside from relying on the general public for unpaid help, the cultural sector also relies on its own staff and workers to provide unpaid work related to various aspects of keeping a business operational.

The concept of an abundance of available production is in many respects a by-product of the low barriers to entry of working in the sector, particularly among the creative and artistic occupations. While these low barriers can be beneficial for encouraging new entrants to the sector, they perpetuate and (with the aid of technological advancement) increase the prevalence of “gig”-related work. Many focus group participants characterized employment in cultural occupations as being largely short term, part-time, or erratic, with less stable income, few benefits, and no long-term financial security. Participants also reported frequently working in other industries (whether by desire or out of the need to complement or stabilize their income).

Meanwhile, the need to multi-task, cited by close to one-half (49 per cent) of respondents, and the need to develop business and technological skills are widely recognized sector-wide. This is particularly evident among domains with higher rates of self-employment or creative production, such as visual and applied arts and written and published works. Here, self-employed individuals frequently have to undertake duties beyond their artistic production, including the many diverse tasks needed to run a business (marketing, securing funding, etc.).

Another theme expressed during the focus groups was related to the inadequacy of the nomenclature and the associated gaps in data captured. The widespread opinion expressed during the focus groups was that the nomenclature used by official sources is outdated. The language more commonly used today relates to skills rather than occupations or static job titles. As a result of the inadequate (or imprecise) nomenclature used, the associated data reported from official statistics is often viewed skeptically. Some of these issues have been addressed in the form of recommendations in Chapter 10.

Broader issues not specific to the cultural sector (e.g., discrimination, ageism, ableism, racism, sexism, tokenism) arose frequently through the various consultations. A specific recommendation in the report is to provide training to staff and boards of directors that integrates best practices on human resources issues (e.g., harassment and inclusion).

In addition to the recommendations to strengthen the cultural infrastructure, recommendations are also made to address the significant data gaps that inhibit an accurate assessment of the cultural sector. This includes developing a pilot project to assess new and better practices in data collection specifically aimed at capturing the “gig economy” reality. Another recommendation is to develop a human resources module within Statistic Canada’s Culture Satellite Account, much like what has been done for the tourism sector.

While, in one sense, the cultural sector looks to be thriving, it appears this way thanks to the collective and unerring efforts of a passionate and dedicated workforce that wishes to always do more even when there is less to do it with. In another sense, this workforce hides some of the difficulties tied to the production so prized by all.

Projections in this report suggest the sector has the potential to keep expanding in the years ahead, growing its economic footprint and employing more Canadians. Specifically, the sector’s contribution to Canada’s real GDP is forecast to increase by over 15 per cent between 2017 and 2026. This will support further growth in employment of just under 8 per cent.

Labour challenges associated with an inability to recruit and retain positions in the cultural sector will become more prevalent in the years ahead. Addressing the recommendations in this report to strengthen the cultural workforce and meet the challenges posed by various skill gaps will go a long way to ensuring the cultural sector continues to be a net contributor to the Canadian economy and reaches—or even exceeds—the growth projections identified here, all while maximizing cultural sector employment.